BoA To Participate In This Years Infinity Challenge Song Festival

96 replies to this topic

BoA along with G-Dragon, Yoo Hee Yeol and Primary will participate in the Infinity Challenge special that will air next month.

More participants will be announced later on and filming begins on the 04.09.2013.
http://www.allkpop.c...e-song-festival

This is awesomeee, i've watched the past specials TT.TT so excitedd, I'm guessing she'll either collab with Yoo Jae Suk or Leesang's Gil since she's primarily close to those two. For those unfamiliar with this special, the contestants compete for composing/writing the best song, although it doesn't really matter who wins because it's a light hearted competition:

They'll film the initial meeting, the writing/recording process, and there'll be games and get togethers leading up to the concert TT.TT I like the line-up of other artist featured for this special tooo!

I hope BoA busts out w/ her dance moves...

BoA's composing ability will shine. I believe in her!

I wonder who she will collaborate with.

I hope BoA writes a good song and wins; she deserves to as the Queen of Kpop. I'm glad to see her getting more and more involved in Korea.

Whoaaa, so glad to see that she's becoming more and more active!

Busy month for her haha!

wow this is so cool, i just can't imaging boa and gd to reunite on a tv show since they go a long way back.... 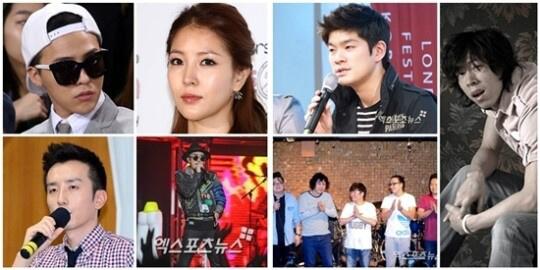 The first episode airs this Saturday on the 7th! Note that this special will probably span 4-5 episodes!! <3 Can't wait

Seven of Koreaâ€™s most talented musicians are ready to introduce new sounds with the all-star members of popular TV variety show â€œInfinite Challenge.â€

The taping of the program is currently taking place under the theme of â€œInfinite Challenge Night Club,â€ where the partner selection will be held in an exciting atmosphere.

G-Dragon iis participating in the programâ€™s song festival for the second time after 2011â€™s â€œWest Coast Higway Festival,â€ where he collaborated with comedian Park Myeong-soo in party tune â€œI Had an Affairâ€ (translated title).

â€œInfinite Challengeâ€œ has been one of Koreaâ€™s most loved programs for the past eight years with its regular host members Yoo Jae-suk, Park Myeong-soo, Jeong Jun-ha, HaHa, Noh Hong-chul, Gil and Jeong Hyeong-don, now top stars in the country.


There's a poll in Daum to see who'll win, BoA's in second place

BoA will do very well in big shows like this. I miss her epic and amazing and powerful performances

I hope she collaborates with Park Myung Soo.

He always has the best collaborations.

I'm really surprised, G-Dragon has quite a following. I'm really happy for BoA though

Also tagged with one or more of these keywords: BoA, Infinity Challenge, K-pop