^ ID Peace B was the most confusing. I was debating between #3 and #4, but went with my gut feeling haha so 4/4. Qualified fan XD

So much sass and attitude from the HV lady doing the KML dance. That was my favourite part.

After having not listened to BoA's older songs for a long time, the older songs they played in the background made me feel so nostalgic <3. Hurricane Venus lady was awesome with her dance. 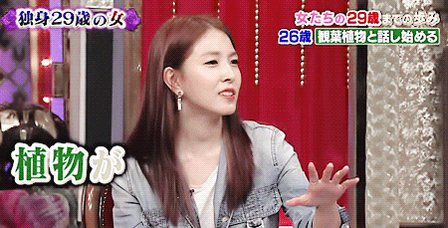 BoA appeared as one of 3 guests who are all 29yo single ladies.
The show concept is to compare how similar/different they are.
30 seems to be deadline for marriage to average Japanese women so everything discussed geared that way.
Here are translations of things BoA said on the show.
Everything she said was funny making everyone LOL.
After hearing that Tanaka Minami, one of the guests, often cries at home because of loneliness.
"Is this show for guests to speak their troubles and be gloomy?"
Minami revealed she started talking to plants when she turned 26.
When asked by MC, BoA went "I hate plants."
"I hate seeing them die" Everyone was shocked and MC corrected her choice of words. Apparently Japanese do not use the word "die" with plants.
"I hate seeing them wither" BoA corrected her speech
About thing she discovered at the age of 26: written as "Realized that XXX is actually XXX" on the board
Turned out it was "Realized that hopeless guy is actually hopeless" (she used the word 'dame-otoko' which can be translated as useless guy, no good guy too)
Everyone was like what was that about???!!
BoA defended herself "But it was the age that women fall for hopeless guys!"
After which, the MC agreed with her that women got wiser in picking their partners as they age toward 30yo.
About women become impatient about finding marriage prospect once they turn 28.
"But when they lost their chance at 28, they would start to think 'oh well it's ok to look around more I guess' at the age of 29-30"
MC "That's what I was about to say (looking at info in his hand). After missing their chance at 28, women are divided into 2 groups: one taking their time in finding partners and the other so pressed in succeeding before 30"
Food topic. Minami has granola and tiger nuts for breakfast. What about BoA?
BoA "Rice"
MC "with?"
BoA "jigae-nabe (hot pot)"
MC "for breakfast??!"
BoA "I eat lots for breakfast. I eat lots for lunch. And eat lots early for dinner"
About aging, "lately I've experienced joint pains here and there"
MC "You can't squeeze in tight jeans anymore then" (Valenti reference)
BoA's most memorable present from her boyfriend(s) is a letter.
Minami shared that she used to exchange diaries with her boyfriend.
MC "What did you do with it after breakup?"
Minami "..."
BoA "Burn it"(with deep voice)
BoA "I don't wanna leave any evidences"
MC "What if it's a ring or necklace"
BoA "Melt it"(still with a deep voice)
Later MC talked about memory card with past pictures in it.
BoA "I'd burn that too"
MC "You have incinerator at home or what?!"
MC "Do you confess when you like someone?"
BoA "I did and was turned down."
MC "Why?"
BoA "I don't know."
MC "Is it because you're a celeb so you look tough"
BoA "I myself don't think I am tough but I got that a lot."

^ Hahaha omg this was hilarious. This show was totally out of the blue! But it's kinda of sad; I hope BoA will find a guy to make her happy soon!!

Also her expressions on that show were gold! I loved seeing her laugh wholeheartedly

BoA was so funny when she said that she burn or melt away her ex's gifts. Thanks for sharing. Would've been better if the translator had put the dialogue/translation in order. I had to rely on my dismal Japanese to guess when she said a certain thing. I also wonder who that "dame otoko" was.

Why do I feel that BoA will recieve hate from japanese netizens? Lol