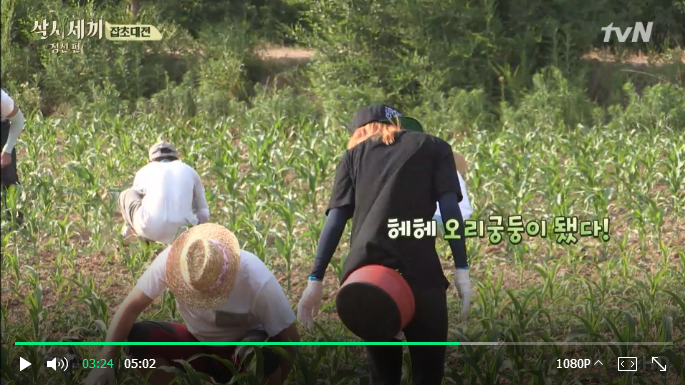 [by Yanchingsally Chu] Yoo Hae Jin and BoA took up the challenge of cooking grilled chicken.
They participated in the â€˜Jeongseon specialâ€™ of tvN â€˜Three Meals A Dayâ€™ as guests. Their amazing chemistry raised the attention of the audience.
Yoo Hae Jin appeared in the â€˜fish villageâ€™ special of the program before and got the title, â€˜Master of brazierâ€™. He was good at building a fire and helped in cooking the dishes by controlling the fire steadily. Although he is a lover of instant food, he showed his hidden cooking ability on the previous episode, which he cooked various kinds of soups.
On the upcoming episode, he took up the challenge to cook the grilled chicken with BoA. He started to build a fire like a specialist and it is said that the dish cooked by them had a great taste, surprising all the people on the spot.
In addition, they went to picnic with Lee Seok Jin, Ok Taecyeon and Kim Kwang Kyu near the valley. They put their feet inside the water and chatted with each other, creating a harmonious atmosphere.
Meanwhile, â€˜Three Meals A dayâ€™ continues to air every Friday at 9:45pm KST. (photo by CJ E&M)

Honestly, this recent 3MD episode was even more boring than the first. I wish BoA would be more carefree like she is in Japanese TV shows. Aside from her music and performance skills, her personality is what made me a fan but she doesn't really show her true self anymore in broadcasts.

I got bored trying to watch 3MD since I don't understand Korean. I just can't stand watching a foreign show without Eng subtitles. The only exception is if there's a very attractive guy in it. lol I will wait until there's subtitles. If only BoA could do something similar to Invincible Youth...

In the last episode of crime scene they made like some awards voted by viewers and 1 category was "best guest". BoA was one of the 3 nominated, but as expected xiumin from exo won. But it still positive that she was in top 3 best guest ^^

I hope BoA will make it to Infinity Challenge!

^ Unfortunately it seems that there are no SM artists this time. Netizens are blaming it on her previous appearance

Yeah... I still remember the hate she received after her last appearance on IC, better to stay away.

Article: 'IC Music Festival' why is only SM left out? "No special reason"

1. [+201, -25] Because BoA screwed it up for them last time~ and SM doesn't even have any singer-songwriters so it's even harder for them to participate

4. [+126, -12] You saw what happened to BoA last time with her multi talk. Should've shut it with the multi and focused more on writing the song... SM pushes BoA as their best but her recent song isn't even that good. Imagine the rest of their line-up...

I think BoA's a great composer/songwriter, but as a producer she still has a long way to go. None of her productions were successful. I too was disappointed with her IC song, she had a chance to do an incredible collaboration but settled for something mediocre.

I like how commentrr 4 didn't bother listening to the rest of the album... :|

Also, I think IC could be an opportunity to
BoA prove herself.

^I think it would be better for BoA to prove herself by continuing to put out music for herself (repackage album!), despite the exposure putting IC into the equation puts more pressure on BoA.
All the songs on BoA's "KML" album is superior to that GAB song she did, GAB started off great for the first verse but went downhill with the chorus, and the inclusion of all those random dance breakdowns made the song completely disjointed, smh.
Had BoA been included in this year's IC, we would've seen more than 200 downvotes tbh.

But instead of working on her repackaged album, BoA ran away to Jeju island.

I am gonna go rewatch her 3 meals a day ep with eng sub n hopefully it won't be as boring since I can understand it. Its kinda funny how the shows that are popular in korea has low international interest n the shows that are popular internationally are low rated in korea...this show has pretty good ratings for both of boa's ep so even if we think it was boring, at least boa had some exposure time that the south koreans in south korea can enjoy

Becoz a lot of people enjoy cooking stuff like this show lol.

I honestly enjoyed her appearance on 3 Meals a Day & Crime Scene. Sure I do wish she would've shown a little more of how quirky she really can be like we've seen in her older Japanese variety appearances, but I guess it's one step at a time. LOL

From what I've seen on twitter, it looks like her episodes did relatively well with the ratings as well, so regardless of what knetz will comment -- I don't think it was a complete failure for her to go on different shows.

As for Infinity challenge....eheh let's hope she definitely gives a bit more work into her production skills before attempting another go.

She did mention being interested in doing Running Man while the weather is not so cold, so that's a possibility too!

No NO no to IC again. She has A LOT of failed projects in the second half of her career, but IC was one of the worst. I don't think it helped her at ALL and only made people even more skeptical about her songwriting and creative abilities. The performance was also pretty mediocre with bad choreo (as expected from Korean choreographers), a really raspy voice (was she sick?!? she sounded sick), and very weak lip-syncing from that rapper.

As for Korean shows, she rarely gets positive reception (the only big exception: K-Pop Star), so I'm not surprised. Personally, I'm not into Korean shows AT ALL (I think their sense of humor is dumb), but I wonder why BoA, as a Korean, who has plenty of Korean friends, is finding it difficult to do "well" on these.

Erm....BoA's episodes on Three Meals A Day received the highest rating 13% above the average 11%...

Well, Infinity Challenge was a failed project no doubt, but KML is not!!! At least to me

And yes, we have seen the discrepancies in the opinions of international fans and Korean fans. What we like, they don't and vice versa hahaha