tokyo_honey hasn't added any friends yet.

What's more annoying than a movie production company switching out leading characters last minute? Movie production companies who REFUSE to confirm whether or not they have actually switched out the leading character! As much as I love the big minds behind "NANA" the Movie, they are REALLY starting to irritate the hell out of me. This whole rumor about Aoi Miyazaki not being casted as Komatsu Nana in "NANA 2" has been floating around FOREVER now. Lately, the rumor came to the surface again, saying that Yui Ichikawa is replacing Aoi Miyazaki as Komatsu Nana in "NANA 2."

The whole theory of Aoi Miyazaki "leaving the cast" was first published by the tabloid, "SAIZO." Since then, the rumor has gone hot and cold, with fans believing one thing or another. And as time passed, the idea of Aoi Miyazaki actually playing the role of Komatsu Nana in "NANA 2," became weaker and weaker as worried fans speculated on. There were no help from any of the production companies to discourage this rumor. Lately, to further the blow to Aoi Miyazaki fans, Gendai Network is spreading word that Yui Ichikawa has been assigned the role of Komatsu Nana in "NANA 2."

This report by Gendai Network has greatly shocked many fans of the "NANA" world. Even without official confirmation from the production company of "NANA," the news which began as weak gossip, has greatly gathered momentum. Aoi Miyazaki is well known for harboring the innocent virgin image on the silver screen. However, the script for "NANA 2" requires quite an amount of bedroom scenes, as the producers would like to stick to the original storyline of the manga "NANA." The gossip was that the controversy of the bedroom scenes raised objections by Aoi Miyazaki's party, who feared that the movie will portray her in a scandalous light.

This rumor has not yet been confirmed. However, because word of gossip travels by mouth quickly, large news networks like EXCITE who refused to report the information based on the lack of legitimacy, has begun to spread the rumor as well. And once again, the big production companies behind "NANA" are NOT helping the situation by not confirming or denying the rumor.

For many who are not familiar with Gendai Network, they are the source which originated the rumor of Ishihara Satomi and Masami Nagasawa starring in a "NANA" TV drama. So far, this rumor has NOT been proven to be true. Which have given fans a large hope that the Yui Ichikawa rumor can be false. Afterall, if Aoi Miyazaki can be replaced, then it leaves other cast members of "NANA 2" very vulnerable to be switched out as well.

It is FACT that hiring Yui Ichikawa can be a LOT cheaper than hiring Aoi Miyazaki. There will also be no arguments of bedroom scenes because Yui Ichikawa is a very well known swim suit idol. Not to mention, the status of several members from the original "NANA" the Movie cast, have gone up outrageously. SAEKO has repeatedly been casted in leading roles since "NANA." She has gone on to star in "Back Dancer" and "Love Hotels." Her asking price to appear for a small role in "NANA 2" will be a lot higher than before (That is, if they plan to write Sachiko Kawamura in the Sequel at all). And most notably, Kenichi Matsuyama who had only a few lines in the original "NANA" movie, has gone on to star in "Yamato," "1 Litre of Tears," and the highly anticipated blockbuster "Death Note." You think his price for starring in "NANA 2" will be the same as being in "NANA 1?"

In the world of marketing, rumors like these are considered to be publicity; And there is no such thing as bad publicity, right? However, in this case, the rumor is beginning to cause a heavy dismay among fans. Normally, production companies keep information from fans to help build anticipation towards the product. But the production company should know that in the case of "NANA 2," fans are NOT anticipating for Aoi Miyazaki to be replaced. This is indeed bad publicity.

Can someone tell me if the Oversea CD versions have the tracklistings and the booklets in chinese or japanese?

Yuna Itoh is half korean

I read from somewhere that yuna ito is half korean? does anyone know this for sure?

this person is posing as BoA on myspace

If I'm not wrong this person www.myspace.com/princess_tomoko posing as our BoA.

WELCOME TO MY EMP!!!

I know I'm a little late on my EMP, I didnt find out what an EMP was until recently ^^

First here is a gift bag for all the BJJ members.

and ipod video even though most of you have

For girls i give you Fasio make up ^^

and a nice Fasio watch

for boys i give a PSP and our beloved BoA

and BoA tickets for everyone

and lots of food ^^ yummy

For x3NgAx3 I give you Wang Lee Hom, Yunho, Milk YaN YaN

For Ricadonna I give you smexy Daigo Stardust

For Sal I give you Miyavi 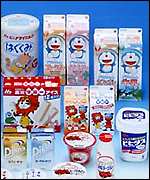 For BoATwin I give you BoA and Pocky =]