1000 Reasons Why You Love/Admire/Like/Respect BoA

1). Because she's can sing her booty off while dancing. Hardcore yo, hardcore.
2). Because she's always conducted herself well
3). She's an excellent role model
4). For her hard worth ethic
5). For her class; BoA's never gone the skanky path even during "My Name" days
6). She's absolutely adorable
7). She's original and fierce
8). She's not some delicate little doll. She's got strength and power packed into that 5 foot something frame
9). She's short. Which I find adorable lols
10). She's a dork who really is quirky lols. Dorks ftw!

And now your reasons? Come on, let's do this

Pleeeeaaasseee tell me I'm not the only fan of Hellsing; this is vampires done RIGHT, not the Twilight, sparkling-pixie-crap-"vampires". I love how Alucard is so dark and violent and bloodthirsty and crazy and insane andkajf;afjvaf he just has that predator vibe and a very... sexual, I guess presence? This is something that falls in line with the modern conception of a vampire, one that popularly started with Dracula (Dracula's wives, anyone?). And probably predates it. The voice actor helps; in both the English and the Japanese versions (especially the Japanese version, oh gaawwwdd), I swear, Alucard has the smexiest voice ever

And then there's Integra. Who's badass as hell. I love how she's so strong and tough and not at all weak or whiny. She's not ditzy, not cute, not "MOEEEE, PEDOBAIT!!!" like majority of anime girls; she shoots a gun, fights, and has a whole order behind her. She's the one calling the shots AND ordering Alucard around. She's the boss lady running the show. And that's awesome. Strong female character ftw.

Not only that, but the fighting is awesome too; it's not Bleach or Naruto where the characters spend 2 episodes in either flashbacks, explaining their weapon/attack, telling the enemy how they figured out their attack, or trying to "save" the enemy. No, this is the real deal; it doesn't hold back on the blood and gore (though it does go overboard at times, I admit) and the fighting is intense. The characters don't fight to injure or unarm; they fight for real and for the kill. And it fits very well with the story, considering these are vampires, creatures of the night. Vampires are predators, are dangerous and deadly. And Hellsing portrays this awesomely.

So who else is with me? Who else thinks Hellsing is awesome and loves this?

Let's talk about both! Both BoA's personal style and what her stylist dresses her up in!

Personal Style: I love BoA's style; it's very tomboy, it looks uber comfy, and it's so... interesting yet normal at the same time, lols. She's personally said herself that she prefers more androgynous clothes (not sure I spelled that correctly, lols... Word has spoiled me too much) and I love it. For example, if you look at her Anyband rehearsal pics, the clothes she chose to wear were much less girly than the ones she wore in the actual performance.

Stylist: For her stylist... I don't have an opinion really. Sometimes, it's amazing, sometimes it's not horrible, but not quite there, and sometimes it's just... bad. Like that dress she wore in the A-nation 2005 performance; it's a mess, seriously, just look O.o 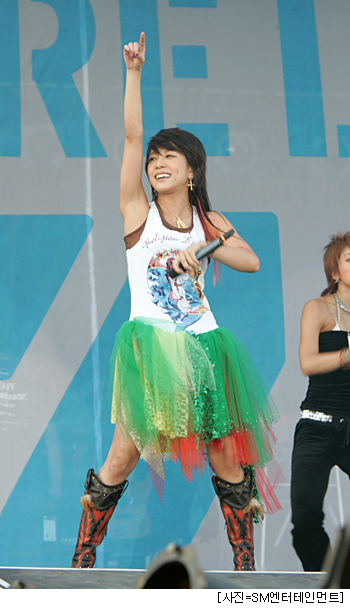 But then sometimes, they hit the mark and you just go WOW, especially her "My Name" and "MOTO" outfits... ooh, and the black dress she wore to the Contemporary Music Award thingy.

So what's your opinion, both on BoA's own style and her stylist's?

Lols and Such a Cutie...

You know how BoA, when she appears on shows and stuff, usually just gives an interview and stuff, while DBSK, Suju, SNSD, majority of Kpop go on shows and do hilarious things (XMan, Love Letter, etc)? Well look at BoA being the freakin' cutest thing since... well, ever here!