shineejongkey96 hasn't added any friends yet.

BoA has never lip-synced before and this is the MR Removed video of Kiss My Lips today at Music Bank.  . SMTOWN's artistes good point is that they don't lip-sync, which is why sometimes artistes is having a hard time because its really a big feat to dance while singing as well

Wow, as everybody pointed, hinachan was the first fan I saw who said the album is horrible haha

'first fan' as in you mean in this forum which has only like 64,428 members and only 1,152 active members, that'd make more sense because you don't really know how many other fans felt that the album could be lacking / not to their taste.

2075 copies.. this is bad. She need to promote herself more in korea and release digital single this year n new album next year lol she cant wait too long like 3years. She is not an artist korean r waiting so much like big bang.. at least not anymore..

I don't think thats the total copies actually, its quite good that she's still maintaining the 3rd place on real-time Hanteo Charts. 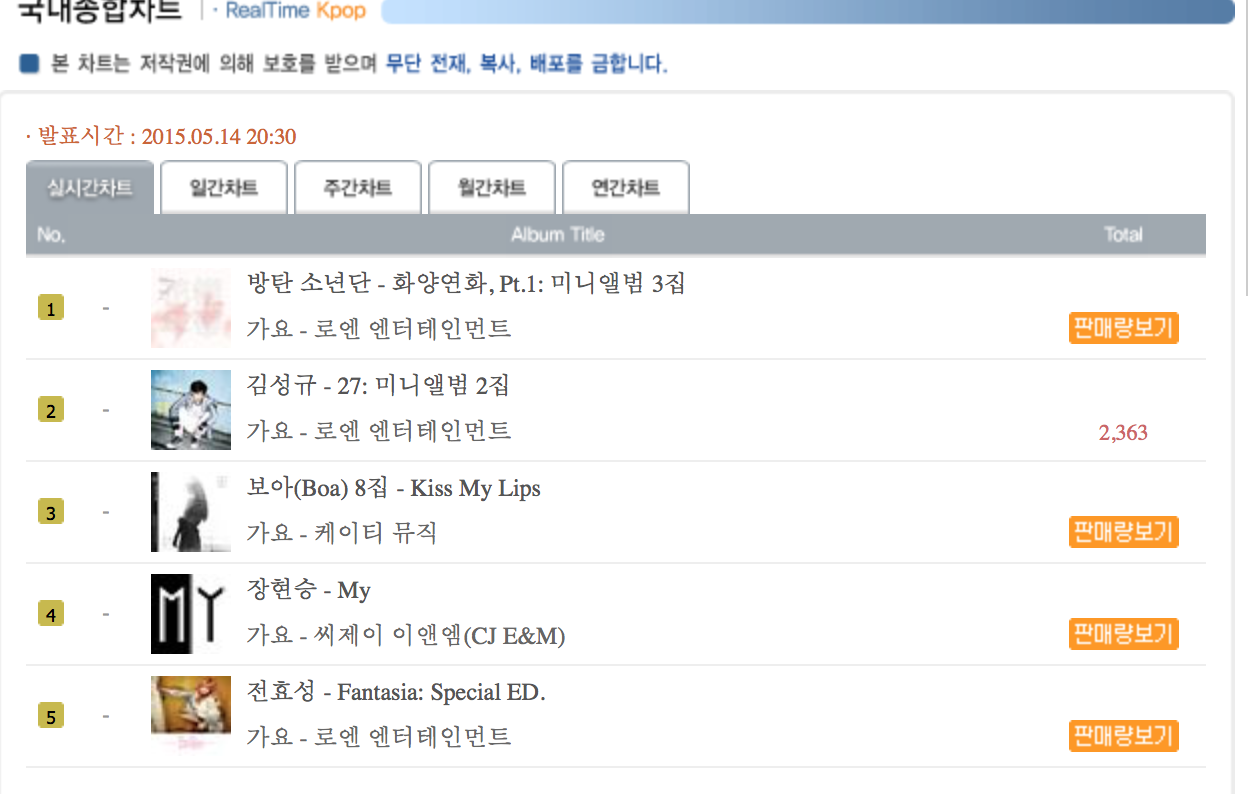 and despite the fact that she's not promoting that much in Korea, her sales in Japan is actually better and its harder to solidify a foundation in Japan as a singer than in Korea. the fact that her concerts always sold out and her albums in Japan sold really well is a good thing for her already, that meant that at least her foundation as a singer is solid in Japan .

Still weirdly surprised at many of the not so good comments. I love this album and I thought KML is a smart choice for the title track! lol. KML uses many odd instruments that make the song very unique. There's some 1980s electronic sounds with a jazz chords progression and mesh with a modern pop synthesizer. I think it's so clever and will be extremely popular with international audience. If I were to choose, I think KML is much better than WAY. Maybe that's because I'm not into the Kpop trend with the cutesy, predictable song structure - 1 listen and I'm done. But that's just my opinion.

Fans are weird. If BoA were to do the usual singing and dancing, fans complain that she is stagnant and not having any improvement over her career. If she were to write her own music and try something new, the criticism would emerge again. As BoA has mentioned, after 15 years she felt like KML is her debut, self-produced album. After following BoA's music since 2005, I am just glad and appreciative that she is constantly reinventing herself, turning herself from a manufactured pop princess into a singer-songwriter. The fact she self written, composed and produced this album is already showing the artist she is, not just some singer-dancer. Well, to each his own.

my exact thoughts too u__u let's just sit back and appreciate what she is doing for her own album, its a big feat to be able to produce + compose your own full length album , tell me just how many idols is able to do this alone? I'm sure BoA would rather we enjoy her music than to compare how well it is doing with SHINee's or EXO's comeback, because there's difference in their fanbase and i just want to quote this one

Maybe you are the first BoA's fan saying this album is horrible. I don't mind about anti-fans, but if any of BoA's fans saying like this, I would say you should move on with BoA, she is not your favorite artist anymore.

i think its unfair to condemn someone just because they have their own personal preferences and the fact that they have their right to say whatever albums they like or dislike. not every album that an idol makes will be pleasing to the ears for each fan. I can say I don't like 'Who Are You' because it is not to my taste, but that doesn't mean I don't like her anymore. It's totally different to say you like/dislike her song and to say you like/dislike the artist. Liking/disliking the song means that each person has different taste and preferences, but to dislike/like the artiste means the artiste failed to capture the fan's attention in terms of everything she does be it songs, performances, personality. It's not fair to tell that person to move on to another artiste just cause an album that the idol released is not to her liking. Just like in SHINee's case, I don't particularly love all of their albums that they released, only selective few of them. Does that mean I'm not worthy to be their fan anymore just because of this trivial issue? No, because I still love them and listen to their songs. Just particularly not in favour to love all of their albums because there's different music styles for different albums.

Usually the mv is released on SMTOWN's Youtube Channel. the album will be on iTunes soon because it takes a while actually for iTunes to have korean albums on their store